Josh and Richard are back to wrap up the year of consumer entertainment tech news. There aren’t a lot of news stories but the guys kept it interesting. After the news, they talked about their favorite media selections of 2021. They chose favorite movies, books, podcasts, TV shows, albums, and games. Ok, only Josh had a favorite game. 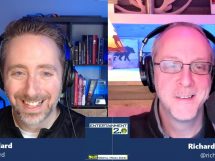 Home: On #150 – Decora Smart with Greg Rhoades from Leviton