Unfortunately, this week’s episode has a lot of bad news. It gets started on a positive note as we look at Vizio’s newest 4k TVs, but then Google had to go and increase the cost of YouTube TV by 30%! ESPN+ also increased their price while AT&T is terminating one of their better live TV services. Fortunately, most of the rest of the news is pretty good!

You’ll have to hang around until the end to hear what might be a rather surprising musing from Josh. 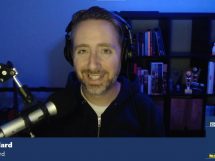 Home: On #151 – Some Help with Robert Spivack from DoItForMe Solutions