Josh and Richard are back to cover the latest consumer entertainment technology news from the Microsoft space. Hulu and Plex are both back in the video news. Hulu Live has added an on-screen guide to their Xbox One app, and Plex has brought HDR support to theirs. iTunes is now available in the Microsoft Store, but does it even matter? Plex has also released support for Sonos speakers to the masses. The Xbox One received another update in May, and Microsoft is releasing the Xbox Adaptive Controller. It’s a new device that should allow many more people to enjoy video games, regardless of their physical abilities.

Check us out on Google+ 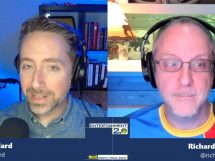 Play on Pandora Subscribe via RSS Rate or Review in iTunes